Topps is having an incredible 1-day only sale: 50% all Star Wars Trading cards! These will be going fast. So, grab some cards to complete those sets or pick-up a box for fans on your gift-list. 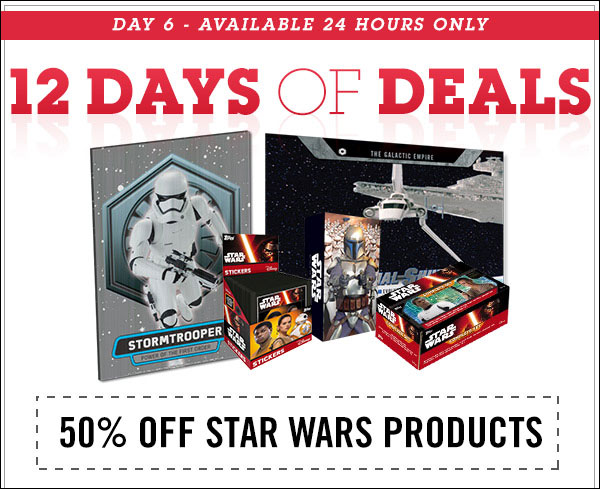 As a longtime collector (and design contributor) to non-sports trading cards, I was reluctant to embrace Topps’ new Star Wars Car Trader app. I’ve been collecting Star Wars trading cards my whole life, and I couldn’t imagine not being able to hold the physical cards in my hand. To me, there was something special about opening packs, sorting the cards and eventually putting them into protective sleeves. I didn’t want to give that up for “virtual” trading cards! It was after a friend showed me all different cards he had collected in the app, that I decided to take the plunge myself... (read more) 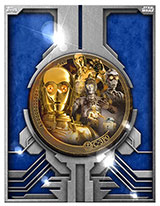 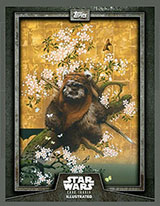 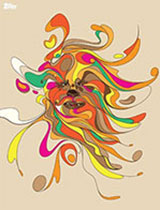 Topps Star Wars 3D Widevision: Attack of the Clones is now on sale now. Click through for full details. 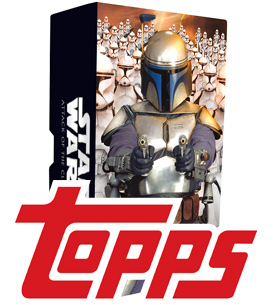 Topps sends in the latest information on their upcoming Rogue One: Mission Briefing Trading Cards, as well as show appearances. Full details after the jump!

Jedi Temple Archives is proud to announce our second Celebration Europe exclusive. We’re thrilled to introduce a running series of exclusive vintage Kenner card back trading cards that will be released in waves of series during a special Star Wars event or landmark. But this is only the first of many! These beautiful large format trading cards feature every last detail of the classic vintage Kenner figures we all grew up with and now you can collect them and cherish them forever in your own Star Wars collection. The inaugural set of cards, also known as Series 1, is exclusive to Celebration Europe and will feature a selection of 4 vintage Kenner and Palitoy card backs including Chewbacca (Trilogo-70B), Yoda (Palitoy ESB-30B), Emperor’s Royal Guard (ROTJ-65A), and Amanaman (POTF-92). Each trading card is 3.5" x 5.25 inches, designed specifically to fit nicely in a 4-up trading card sheet so you can build your own reference guide as more cards are released.

A limited set of these card back will also be reserved for those that don’t attend Celebration Europe. These will be offered in our store at a later date. In the meantime, click below for a complete look at Series 1! 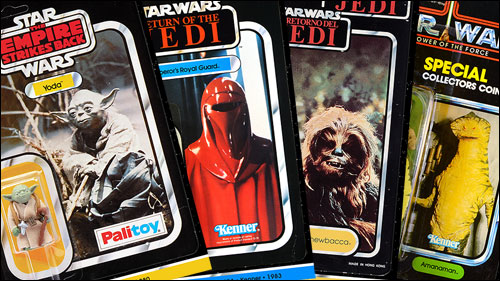 This set will take collectors on a journey from The Phantom Menace through The Force Awakens as well as highlight character evolutions like Anakin Skywalker to Darth Vader and Luke Skywalker rising from Tatooine farm boy to Rebel Alliance hero and Jedi Knight. (read more)

Topps is celebrating May the Fourth with free giveaways and the release of Star Wars Galactic Connexions Series 3. Click through for all of the details... 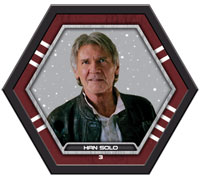 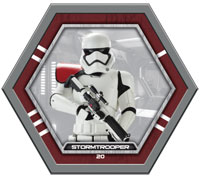 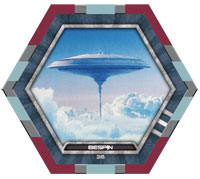 The Force Awakens Series Two is out now. Mass market packs are hitting early, while the hobby sku hits shelves this Wednesday March 23rd. Get all the details (and a few sample cards) on Topps' latest card set after the jump! 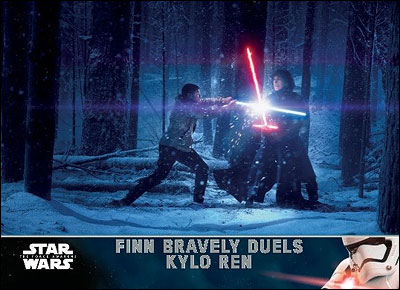 Topps will be offering 7 oversized card sets in the vintage 1977 look and feel. Each set contains 10 cards featuring one faction from the Star Wars saga. Each set will retail for $20 (tax included) and will be sold exclusively at New York Comic Con. This will be a pretty limited print run of just 250 per set. You will find Topps at Booth 2266! Click through for a sneak peek!

Topps will be busy at SDCC today. Here's what collectors can expect: 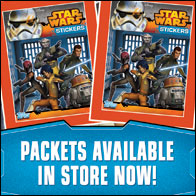 The latest Topps Star Wars set is out today! Star Wars Illustrated: The Empire Strikes Back makes its way to shelves. Click through for the details!

Also, Topps is teaming up with JTA once again for a free giveaway from this new series. Stay tuned for details! 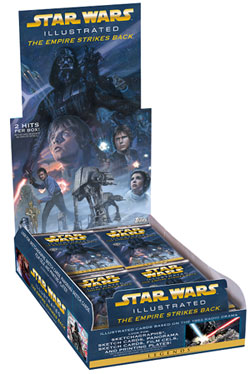 Topps announces their upcoming Star Wars Chrome Perspetives: Jedi vs. Sith Series. Click through for full details on this set including a look at over 20 cards. And, this set has 50 Jedi Temple Archives cards! We're pretty happy about that, even if it doesn't really have anything to do with JTA (It still looks cool—and they even used a very similar font to our logo's font)! Look for this series this August.

We have a winner! Congratulations to JTA viewer Stephanie M. from Pennsylvania, the winner of a box of the brand new Star Wars Rebels trading cards. Thanks to all who entered and a big thanks to TOPPS for sponsoring this contest! 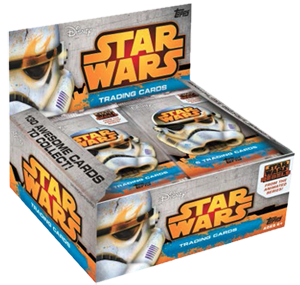 Win A Free Box Of Topps Rebels Trading Cards From Topps and JTA!

Topps and Jedi Temple Archives are giving away a FREE box of Star Wars Rebels trading cards. How do you win? All the details after the jump!

UPDATE: Our contest has now ended!

Topps continues their Star Wars releases with an all-new Star Wars Rebels set based on the animated series. Click through for information on the complete set, as well as a look at some of the cards. 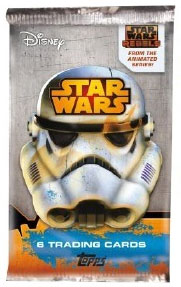 We've got another round of 'on the hour' updates featuring more and more freebies offered up at Celebration V! Stick with us throughout the day for more galleries. First up is Topps. Click through to find out what you could get for free from everyones favorite Star Wars card maker...

We'd like to extend a congratulations to Dan Curto, who gets to be a part of Topps history with his contribution to the next set of sketch cards coming our way! You can read all about it right here! Good job Dan!

Topps is gearing up for the 30th anniversary of The Empire Strikes Back with 3D trading cards. Click here for all the details. These are shipping the May!

The Clone Wars as you've never seen it before... Topps is ready to release their latest Star Wars trading cards: The Clone Wars Widevision. Click here to check out the main page, with information on all the inserts and chase cards. On sale this month!

Topps Brings Us Yet Another Young Skywalker

"May the art be with you, young Skywalker!" Nathan Hamill, whose family connection to the Star Wars universe comes courtesy of father Luke Skywalker (Mark Hamill), recently joined the ranks of artists contributing their talents to the 4th series of Topps Star Wars Galaxy trading cards. Check out more of the details and a few samples of Nathan's work, here!

Continuing the diverse artistic interpretations of the Star Wars universe, StarWars.com shares a look at the all-new release of "Star Wars Galaxy IV" sketch cards from Topps. This series includes sketches depicting characters from the saga as well as the new TV series, as visioned by artist Jessica Hickman. For more info, click here!

Stop by Topps.com and check out all the details on the upcoming Clone Wars set. This set contains the usual wide variety of chase cards, including Sketch Cards, Foil Cards, and Motion Cards. The Cards go on Sale July 26th.

Topps is throwing their craft in the 30th Anniversary ring with a very cool set of 120 trading cards. Read all about what is in store for this new set over at Diamond Comics!

The Official Site has also announced that in addition to actors James Earl Jones and Mark Hamill, Carrie Fisher will be signing some limited edition signature cards in the upcoming Star Wars Heritage series. Look for the cards to arrive in your favorite comic store the week of September 20, just in time for the release of the OT on DVD!